BBQ; is there any other food that embodies the United States? No introduction necessary, let’s jump right into the list.

One of the three BBQ spots in Lockhart that make up what is known simply as “The Pilgrimage” (the other two being Black’s and Smitty’s). Kreuz Market has been smoking BBQ for over 100 years. This old-school establishment, that has been led by pit master Roy Perez for 30 years, discourages BBQ sauce or forks and is the true embodiment of classic Central Texas BBQ. As such, the mouth-watering, melt-in-your-mouth brisket is the must-get item here, but don’t sleep on their original smoked or jalapeno cheese sausage. Just be sure to leave room for another BBQ spot in “The Pilgrimage” even higher on our list. 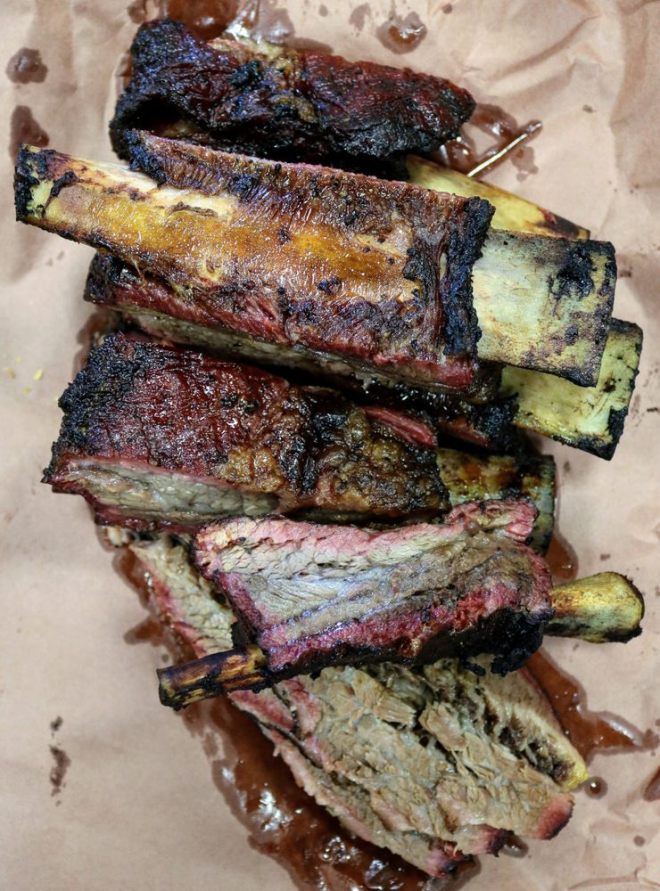 “Smoke is Our Sauce” is the motto of what is well-known to be the best BBQ in Memphis. The superbly seasoned dry rub, 24 hour marinade and slow-smoking process make these ribs tender beyond belief. The flavor profile of these fall off the bone ribs make Central BBQ a must for anyone visiting Memphis. Get them dry, wet or half and half, but don’t skip on their original BBQ sauce, which despite their claim that “Smoke is Our Sauce,” is absolutely fantastic. Their slow-smoked pulled pork is no joke either, so oddly enough, don’t skip out on the pork BBQ nachos; just be sure to lather them in their delicious sauce! 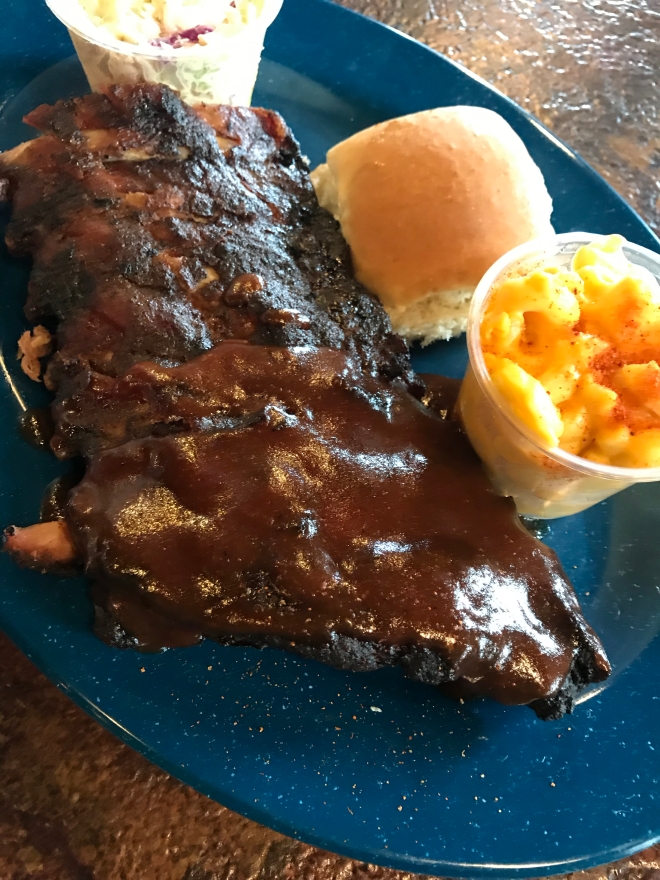 We see you rolling your eyes, but as evidenced by the usual hour-plus wait time, Phil’s is one of San Diego’s most prized possessions. While other places on our list usually have one or two items that they are iconic for, Phil’s is relatively well-rounded. Their ribs, BBQ Broham (pulled pork) sandwich, and El Toro (tri-tip) sandwich are all cooked flawlessly and are our favorites. All of these items go great with there ever-so famous sweet and tangy sauce. When you can put a sauce on literally every item that is served to enhance the flavor, you’ve found yourself a sauce that you have to buy and take home. If you’re in the San Diego area, it’d be a huge misteak not to go to Phil’s.

Dallas is lucky that Jill Bergus, with the help of her family ties to number 10 on our list (Kreuz Market), brought Central Texas style BBQ to North Texas. As such, Lockhart is renowned for their brisket and will serve you fatty or less fatty cuts based on your preference. The brisket at Lockhart Smokehouse has a beefier, smokier taste than places actually in Lockhart, Tx, but with the unique smoky flavor profile of the brisket here, we are not complaining. Be sure to also get the shoulder clod which is leaner and has a beefy flavor or even go for the same sausages that are served at Kreuz market. If you come to Lockhart on Wednesday, you’d be remised not to get the positively wonderful beef ribs. If you come on Thursday you had better get those burnt ends. It’s all about the beef at Lockhart and in true Central Texas style, there’s no need for sauce here. After getting your BBQ fill, head down the street to emporium pies to get the Lord of the Pies, the best pie we’ve ever tasted. 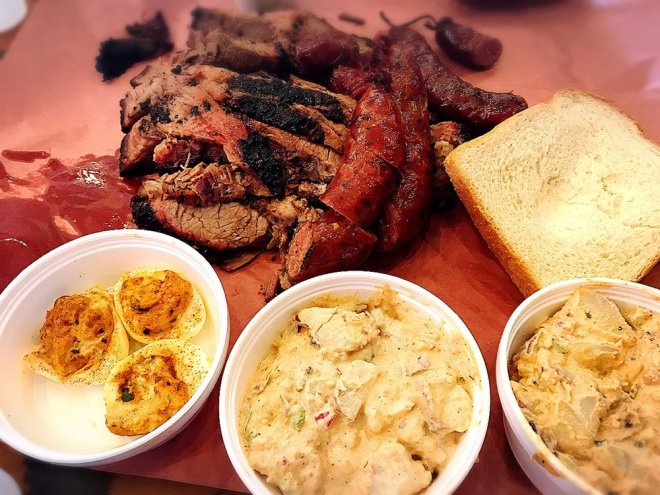 Opened in 1932, Black’s is our favorite BBQ spot on “The Pilgrimage” in Lockhart, Tx. The item of choice here is the giant (each 9 inches long, 2 inches deep and weighs about a pound) beef rib, an item that single-handedly elevates Black’s to BBQ stardom. The smoky outer bark compliments the juicy and amazingly tender interior marbling of the meat. The mouth-watering beef rib is quite fatty leading to a juicy and flavorful undertone to the rib. Some think it’s too fatty, but some also think that the earth is flat. On your stop to Lockhart, Tx, you must get the beef rib from Black’s, an establishment rooted in history and a place that is the reason that number three on our list exists. 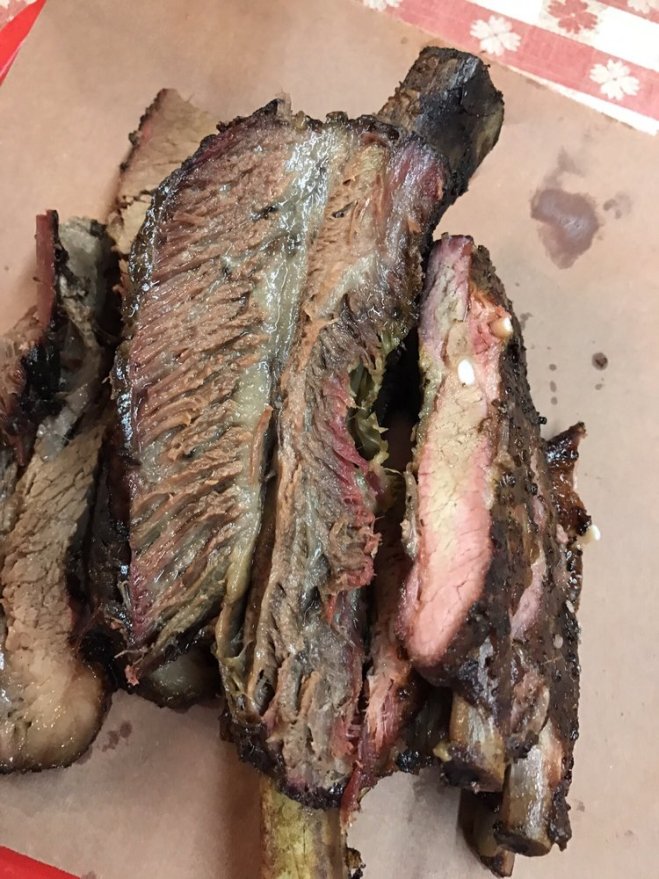 Who knew that Arizona oak and pecan wood could smoke some of the best meats in the country? Well, apparently everyone in Arizona did, because although Little Miss BBQ doesn’t open until 11 am, patrons get there at 9 am to receive a ticket to ensure that they get the best that Little Miss BBQ has to offer. That best is the fatty brisket. It’s smoked to perfection, tender beyond belief and has a flavor profile that will leave you begging for more. The beef ribs have a similar flavor profile and tenderness as the fatty brisket with marbling that makes the Mona Lisa look juvenile. While the house BBQ sauce, sweet and tangy mustard and spicy BBQ sauce are all great in their own right, the meat alone really shines at Little Miss BBQ. Don’t leave without getting Bekke’s smoked pecan pie. Arizona, with a top five BBQ spot in the nation, you continue to surprise and amaze us. 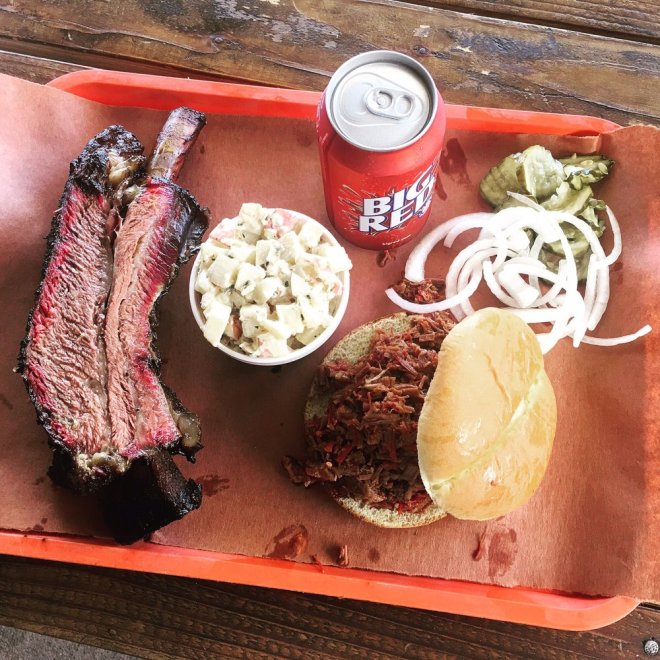 The best ribs we’ve ever tasted, but don’t take our word for it. Pappy’s has been named the best ribs in America for numerous years from numerous sources. These Memphis Style pork ribs are dry rubbed and smoked for 24 hours over sweet apple or cherry wood. The crisp outer coating bursts with smoky, seasoned to perfection flavor and the tender, fall off the bone interior make these ribs delectable. Do not even think of getting the half-rack, you will regret it, get the full rack of ribs. A pleasant surprise for us was the Sweet Baby Jane BBQ Sauce which complemented the ribs seamlessly. While their other meats are all good, the star here is the ribs and there was no doubt in our mind that Pappy’s had to be in the top five.

Pulled pork lovers rejoice, Rodney Scott brings you the best pulled pork in the nation from humble Hemingway, SC, a town with a population of just 411. While not easily accessible, this is a must-visit for any BBQ lover. They mop, quite literally, their whole hog in a vinegar, pepper-based sauce/marinade used in the Pee Dee region of South Carolina (not the classic mustard-based sauce the Carolinas are usually associated with) as it’s smoked. This is the same “sauce” that you can add to the pulled pork after you order it. The sandwich you get here is two slices of normal white bread with their pulled pork, and, quite frankly, that’s all you need. The moist, absolutely exquisite flavor profile of the pulled pork and the unique vinegar pepper sauce is truly heavenly. Ask for skins on your sandwich and/or meat for a unique boost in flavor. Rodney Scott has since opened a location in Charleston, but for the full, true experience, make the trip to Hemingway, you’ll be glad you did.

Yet another spot stemmed from Lockhart, Tx, Terry Black of The Original Black’s BBQ passed down his knowledge to Michael and Mark Black who opened one of the most underrated BBQ spots in the nation. We believe that Michael and Mark have taken their heritage to the next level with Terry Black’s, established only in 2014, while still maintaining that old school taste. The brisket and beef ribs here are to die for. This impeccable duo are the most tender, juicy meats with explosion of flavor due to the perfect fatty content. While the stars here are obvious, the jalapeno sausage, chopped beef and pork ribs are all fantastic. Grab your cafeteria tray, grab some sides (their deliciously creamy mac n cheese is some of the best in the country and the banana pudding is no joke) and head to the back where servers are waiting to serve you some of the best BBQ in the nation. 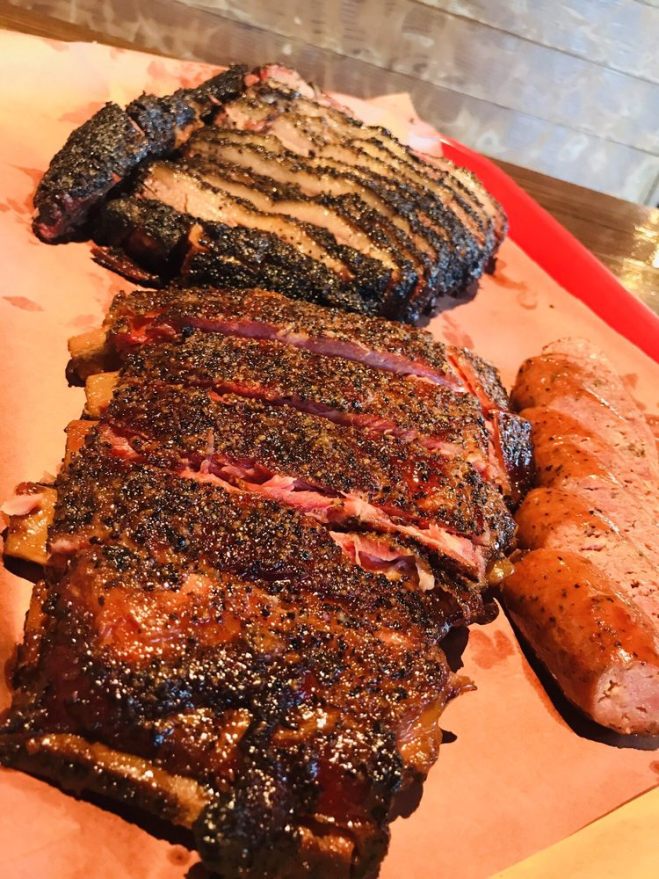 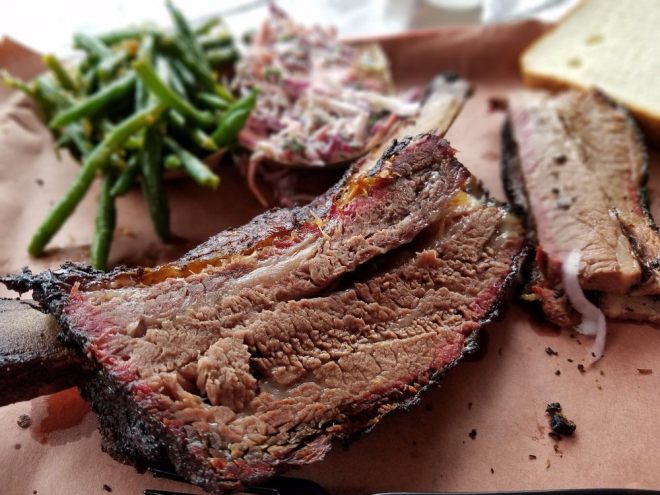 Did you really think it would be anywhere else? Have you been living under a rock for the past 10 years? Did you doubt that Austin would have the best BBQ in the nation? The only way you answer yes to these questions is if you’ve never heard of Franklin Barbecue, the best BBQ in the United States and, therefore, the world. No discussion about Franklin starts without mention of the wait. Die-hard patrons regularly flock five hours before Franklin even opens to ensure that they are first (or at least first ten) in line. While getting to Franklin at 5 or 6 am seems ridiculous and tiresome, the wait is actually more of a tailgate. Yes, a tailgate for BBQ, imagine that. The friendly staff at Franklin’s gives out lawn chairs as well as umbrellas during the rain. Those who wait in line get along well as we are all light-hearted, crazy people who would wait in line for up to five hours for BBQ. This creates a jovial atmosphere that makes time fly by. Now, onto the meats. Being in Central Texas, it’s no surprise that James Beard Award Winner Aaron Franklin serves the best brisket in the nation. The meticulous preparation of their brisket is only outshined by the flavor profile of this perfectly fatty, perfectly moist, perfectly tender and perfectly seasoned cut of meat. This sacrosanct combination is what attracts people from all over the world to Franklin. While their pork ribs, sausage and pulled pork are expectedly also scrumptiously mouth-watering, the biggest surprise was their turkey which was smoky and juicy beyond belief. The melt in your mouth brisket at Franklin is truly unparalleled, but let’s be honest, you already knew that. 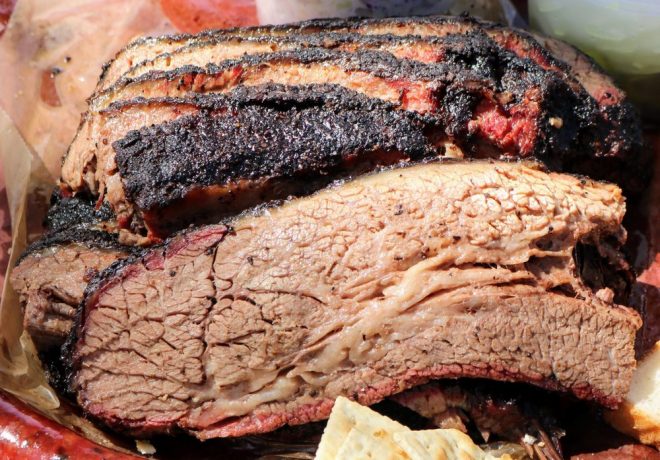